One of Scenic Map's best features is real time GPS tracking. When GPS centering is enabled, the map will smoothly scroll to keep your current location at the center of the screen. The iPhone and iPad with cellular data have built in GPS receivers. If you have an iPod Touch or a WiFi iPad, you will need to purchase a GPS receiver from a third party if you want to use the GPS tracking features of the apps. Scenic Map works extremely well with these GPS receivers since it does not need an Internet connection. 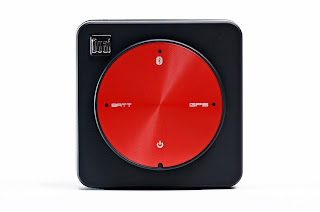 The XGPS150 is a small (2"x2"x0.5") self powered device. It is small enough to fit easily into a pocket. It works with all iOS devices that have Bluetooth. To use it, you just turn on Bluetooth in the General Settings. It takes just a few seconds to discover the XGPS150. Click on its name in the list to pair with the device. 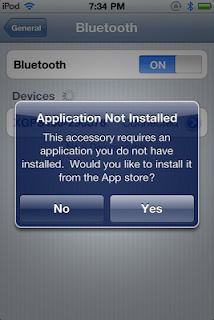 When the GPS is paired with your iOS device, you will get a message asking if you wish to download the app required to use the accessory. Click yes to launch the App Store and download the Dual GPS Status Tool. 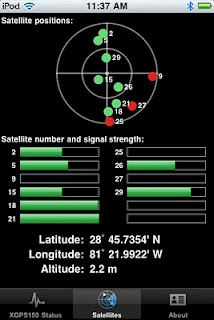 The Status Tool is worth getting. You can use it to display the signal strength of each GPS satellite just like you can with a stand alone GPS receiver. This screen is extremely helpful if you want to use the GPS indoors or in some other location where reception can be challenging. I know I will use this feature when I am on an aircraft.

One accessory that comes with the XGPS150 is a rubber dash mount. The mount uses simple friction to keep the GPS on your dash board. It is soft rubber so it will mold to any shape. It stayed on  my dash for several drives without moving at all.


The XGPS150 has numerous advantages over the built-in GPS on an iPhone or iPad 3G. First it seems to get much better GPS reception. I can easily track my location on an aircraft, in a car or even in my house with the XGPS150. In fact I typically get 10 satellites showing almost full bars indoors. Of course there is no way to know what reception my iPad is getting but being able to see the signal strength of each satellite is another advantage of the XGPS150. The really remarkable thing about using a Bluetooth GPS is how little power is required for an iPod Touch to track your location. If Scenic Map is tracking your location in standby mode (GPS centering turned on with the screen turned off) it can run all day long and still have a full power bar. The XGPS150 has about ten hours of battery life. You charge the XGPS150 with a standard mini USB cable and it comes with a cigarette lighter adapter for your car.

I only have one small complaint about the XGPS150. To turn the unit on or off, you have to press and hold the center of the circular red pad for several seconds. Unfortunately the power icon is near the edge. It is very difficult to turn on the device if you press the power icon. The device makes a plastic crunching noise if you try and it may even be possible to damage the device if you push too hard or too near the edge. If you press the center of the pad (where there is no icon) it is quite easy to turn on or off. Dual should move the power icon to the center or have some other indication of where you should press to turn on the power since there is no visible switch.

Combined with the XGPS150, the iPod Touch becomes an extremely capable GPS receiver. With the very high map quality of Scenic Map, the utility of the Status Tool plus all the other great iOS GPS apps, it is easy to say that the iPod Touch is the best GPS money can buy. It even costs less than a high end mapping GPS receiver and you won't have to pay hundreds of dollars more for additional maps. You can even make the iPod Touch water resistant by putting it in a zip lock bag when hiking.

The XGPS150 is available from Amazon.com.
Product web page: http://xgps150.dualav.com/


GNS 8570 MFI
Another Bluetooth GPS for iOS is the GNS 8570 MFI.  This device works much like the XGPS150 with a few important differences. Its best feature is that it is considerably narrower and thinner than the XGPS150 but is also longer (1 3/4" x 3 1/8" x 3/8"). This shape fits neatly into a shirt sleeve pocket. 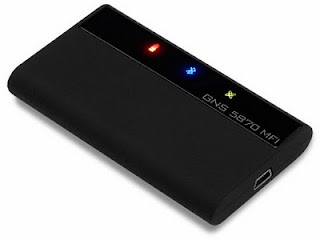 Setting up the GNS 8570 MFI is a bit more complicated than the XGPS150. When you first pair with it in iOS, you are asked for a password. You must enter "0000" to get it to connect. As far as I know there is no utility app for this GPS which is too bad because having a display of which satellites it can see and their signal strength is a very nice feature.

The GNS 8570 MFI has a longer battery life than the XGPS150 (12 hours). Like the XGPS150 it is charged with a USB cable and comes with a cigarette lighter adapter.

The single most annoying feature of the GNS 8570 MFI is the touch sensitive power switch. Rather than having a normal physical switch, the manufacture decided to do something cute and made the top bezel with the power and status lights touch sensitive. You must swipe your finger across this smooth piece of plastic to turn the unit on or off. This sounds cool but in practice it can be a bit of a pain. I can never remember which direction I need to swipe and it usually takes a few attempts to make it work. Worse, if you keep the device in your pocket, it could be easy to turn it on or off by accident. I often find that the device is on when I fish it out of my bag even though I had turned it off previously. This could drain the battery although the device does shut itself off automatically if it does not get any GPS location requests for several minutes.

Another problem I have had with the GNS 8570 MFI is that when it is searching for satellites, it seems to send bad GPS coordinates to iOS. My GPS location jumped around by several hundred meters. The device can also have a difficult time getting a GPS fix is the WIFI is enabled on your iOS device. Even with these issues, the device did a very good job of tracking my location once it had a good GPS satellite fix. At the time of this writing, both the GNS 8570 MFI and the XGPS150 cost about $100 on Amazon. Of the two, I prefer the XGPS150 unless you want the smaller, slimmer shape of the GNS 8570 MFI to fit more easily into a shirt sleeve pocket.

The GNS 8570 MFI is available on Amazon.com. 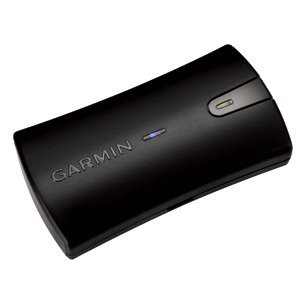 The Garmin GLO is another external Bluetooth GPS. It has a nice design and can also pick up locations from the Russian GLONASS satellites. I have tested it and it seems to work fine. It is the same price as the other Bluetooth receivers. It is easier to turn on or off than the Dual XGPS 150. The case is rugged but not water resistant. You can get a dashboard friction mount for this GPS but it should really be part of the package rather than a pricy add on. You can get a version with a power cable for long drives but you should probably use your lighter socket to power your iPad. You can get nice dual USB adaptors now that you could use to also power this device.
The Garmin GLO GPS is available on Amazon.com.