The GPS Center button has been changed to the standard map arrow icon:

Note: If there are no tracks in the Tracks list and you tap the Arrow button to start a new track, the app will crash.
The work around is to either delete the app and download a new version from the App Store. Alternately, load a GPX file or send one from another app (including another version of Scenic Map or You Need A Map). In Scenic Map or You Need A Map with tracks, tap on any track in the Tracks View, select Send To... and select the version without any tracks. This bug will be fixed in the next update.

The online manual will be updated soon to cover the new features in version 1.6. Here are the big new features and how to use them: 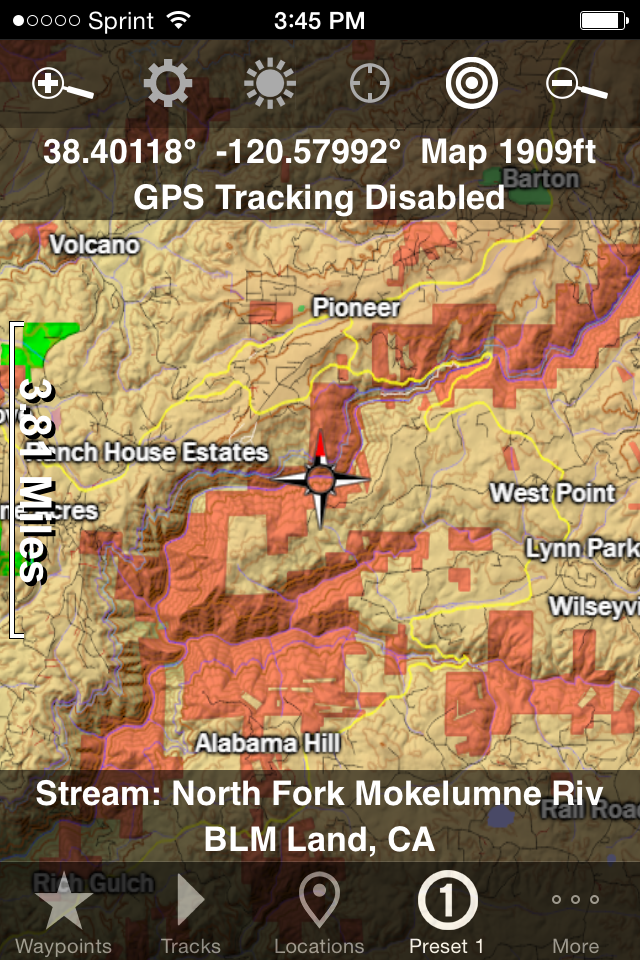 The BLM Lands option in the Settings menu can be used to turn on and off the BLM overlay. This option displays BLM lands and a reddish brown color. The BLM land data was collected on March 22, 2014. It is a frozen database and will be updated with Scenic Map. This will allow the map to be used while offline but it also means that it may be out of date. Please use it as a rough guide and check with the Department of the Interior before making use of the BLM lands map. 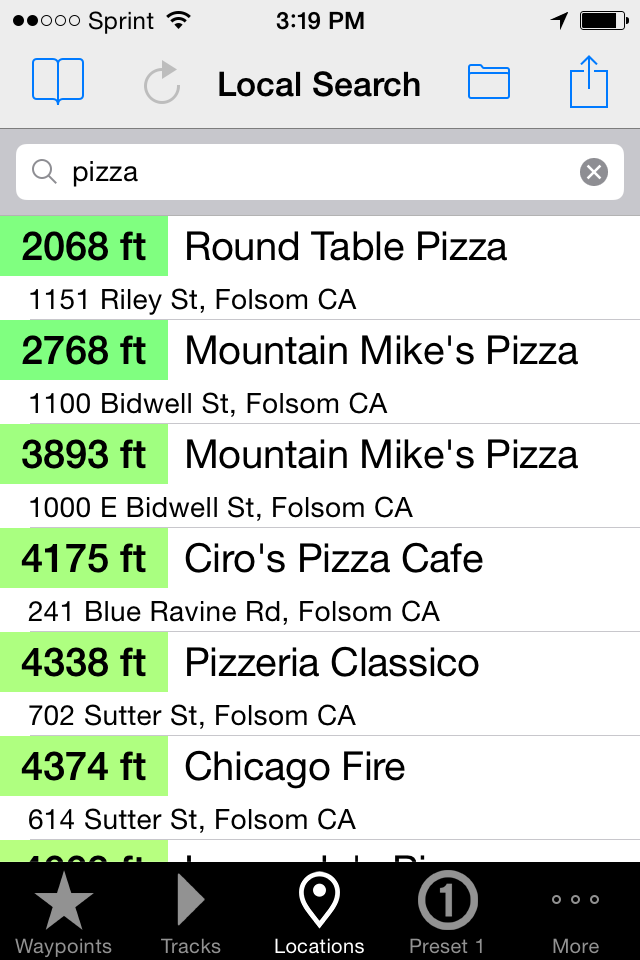 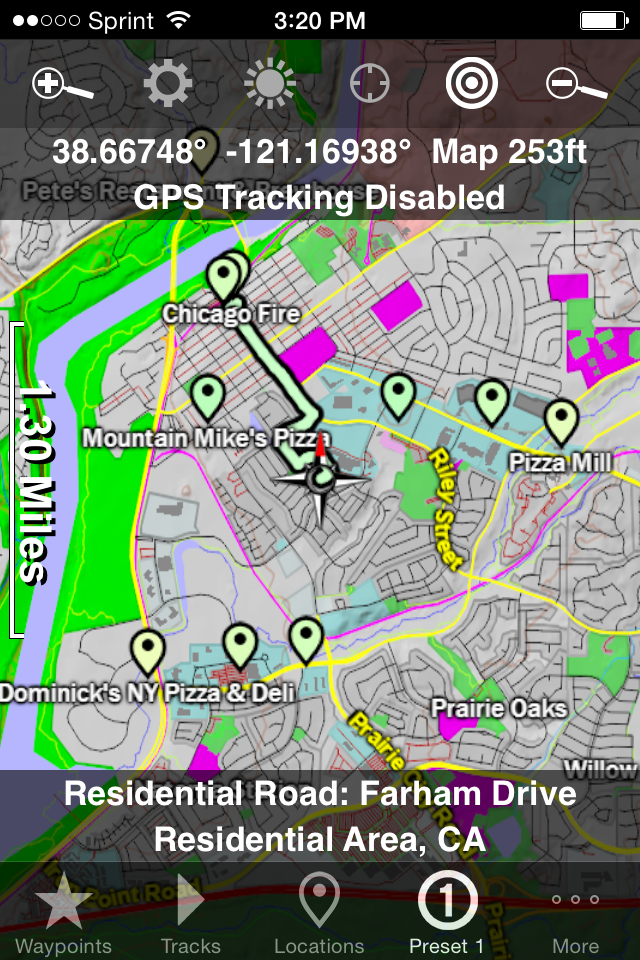 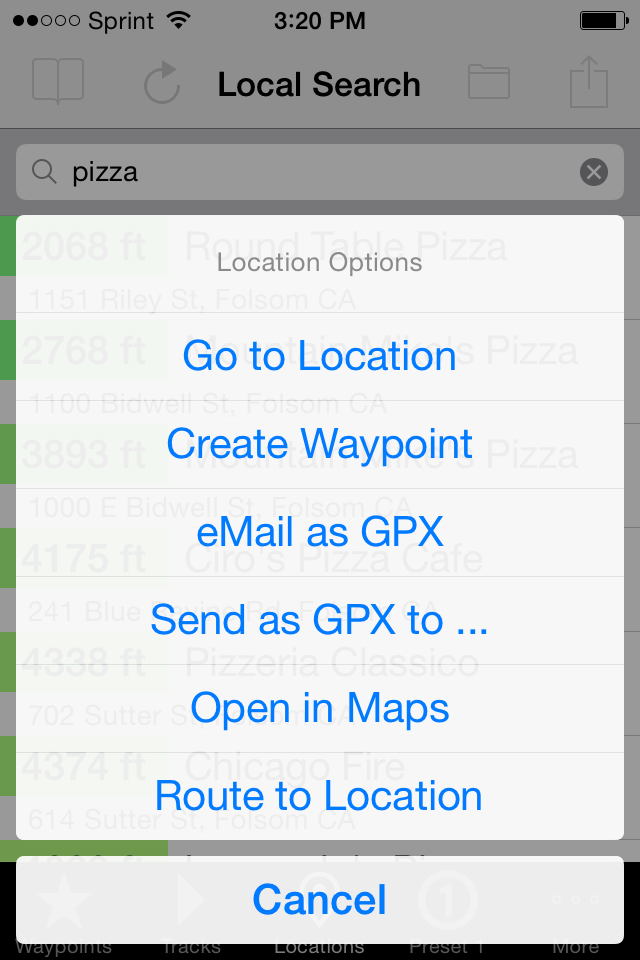 The Locations tab replaces the City Search tab. The book icon in the top left corner is used to select the search mode. These are Address Search (Online), Local Search (Online), Feature Search (Offline) and City Search (Offline). The online searches require an Internet connection. Use Address Search to search for partial addresses within the area of the map. Zoom the map in or out to decrease or increase the area of the search. Local Search can find all kinds of things. In the example above, I searched for Pizza with the map showing Folsom, CA. Tapping on a location brings up a list of options.
The new Route to Location will automatically create a route from the center of the map to the location you tapped on. This feature uses Apple's online mapping service so it will require an Internet connection. However, any routes you create will be saved for offline use. They appear in the Tracks screen just like the GPS Tracks you record and have all the same features. You can even export them as GPX for use in other apps. A bright green track line will be displayed on the map to show you the route you just created. I like to think of this as directions for people that don't like to be told where to go. No nagging. If you like nagging, choose Open in Maps and you can get turn by turn directions spoken to you as you drive even if you are using Scenic Map. I like to use both the displayed track and the turn by turn directions at the same time.
The Feature Search can be used when offline to find a feature on the map. This can be any named feature or feature type. You can search for just a part of a name. The 100 closest matching features are listed. On the map, the features appear as location icons colored (as they are in the list) by their distance from the center of the map. Green is close by and red is far away (beyond the edge of the map).
In the Tracks view,  you can now sort the tracks by date, name or distance. There is also a + button that can be used to automatically create a route from either your current GPS coordinates if GPS tracking is enabled or the selected waypoint. You select a waypoint by tapping its star in the Waypoints view. It will turn red to indicate that it is now selected. Center the map on the point you want to go to, tap the Tracks tab and then tap the plus button to create a route to that point.
Scenic Map now knows about counties and time zones. You can display the county outlines by enabling the Counties feature in the Settings menu. The time zones are used to show you the time that tracks were recorded when they are played back and when they appear in the Tracks list. This should make a lot more sense than the GMT time that was displayed previously.

Version 1.5:
There are three new apps: Scenic Map Western Canada, Scenic Map Central Canada and Scenic Map Eastern Canada. Using data from Canada's GeoBase and CanVec, these maps have amazing amounts of detail. They include streams, rivers, lakes and glaciers. There are two versions of the roads, one from Open Street Map and the other from GeoBase. You can  switch between them in the Settings menu. Great care was taken to merge the features of the various data sources to produce the best possible map.

The new ability to merge data sets was used to improve the quality of the parks and other polygons in all versions of Scenic Map and You Need A Map. In version 1.5 you will see many more parks and other smaller polygon features.

The biggest new feature of version 1.5 is the revised Waypoints screen. You can now tap on a waypoint and get a list of options. You can export the waypoint as GPX and send it to another app or e-mail it. You can send the waypoint directly to Apple's Maps app where you can get directions to that waypoint.  There is also a new button in the tool bar that will let you do the same thing with the entire lists of waypoints. You can also access the entire list of waypoints as a GPX file via iTunes on your computer. There is also an organize button in the tool bar of the Waypoints screen. Tap it and you will get the option to sort the waypoints newest to oldest, ascending names, north to south or west to east. You can also reverse the direction by tapping the organize button and selecting the same sort option again.

When the app is first launched, by default the joystick gestures have been disabled. This is because these gestures are unfamiliar and can confuse first time users. The Joystick Gestures can be enabled near the bottom of the Settings menu. The tilt and scale of each preset are now unified. When you modify the tilt or scale of the map in one preset, it now updates all of them. If you prefer a different map tilt and scale for each preset turn off Unified Tilt & Scale near the bottom of the Settings menu.

GPS tracking has been improved for version 1.5. You will notice that the velocity and heading updates more smoothly as you drive. If you have iOS 6 installed, the apps will take advantage of the automatic tracking feature. This turns off the GPS automatically when you have stopped moving for some time. This will save batteries if you forget to stop tracking. If you prefer to manually stop the tracking (by tapping the track being recorded at the top of the Tracks menu and selecting Stop Recording Track) turn off the Automatic Tracking near the bottom of the Settings menu.


Version 1.4.3:
When you tap on a track name in the Tracks view, there is now an option to display the track. You can do this while recording a new track or playing back an old one. The displayed  track appears as a bright green line on the map.

GPX track import and export has been improved. The GPX track files should now be compatible with more apps.

The maps are now rendered as large as possible for your device. If you prefer the speed or scale of the previous versions of the map, turn off the Large Map option in the Settings menu.

When in Joystick control mode, the map will now re-size itself while you are zooming in or out. You can move or rotate the view while zooming by releasing one finger while moving the other one during a pinch gesture. You can also prevent the camera from following the terrain by touching the screen with a second finger while the map is in motion.

Version 1.4:
By popular demand, the road names are now drawn along roads. This also works for any linear features such as streams, rivers, trails and rail road tracks.

The rendered map size is now twice as large on the iPad 2 and third generation iPad. There is also a "Large Map" option on the third generation iPad which doubles the map size again to take full advantage of the Retina display. To allow for the larger map sizes, rendering speed has been increased greatly on all iOS devices.

There is now a "Send To" option for tracks. This option allows you to send the track to any app that supports the GPX file format.

Version 1.3:
In version 1.3, new gestures have been added to allow you to move the map in 3D. Most of these are two fingered gestures. A left-right two fingered swipe will rotate the map. An up-down two fingered swipe will tilt the map. You can adjust the tilt all the way from vertical (which is the top down view you are used to in earlier versions of Scenic Map) to horizontal (which is a first person ground level point of view). You can also use two fingers to pinch to zoom or twist to rotate. If you don't want the map to rotate, you can enable the North Up option in the Map Style Panel (tap the cog icon in the tool bar at the top of the screen and scroll down).

The above controls comprise the Standard Mode touch interface. Scenic Map 1.3 also has a new touch interface called Joystick Mode. You can switch modes by touching the screen with one finger and holding position for two seconds. You will see two concentric rings appear around the point you are touching. This indicates that you are now in Joystick Mode. You can return to Standard Mode by performing the same gesture again and see a single ring appear briefly around the point you are touching.
In Joystick Mode, the point you touch the screen becomes the center of a virtual joystick. If you swipe up and down, you will begin to fly over the map forwards or backwards. The more you swipe your finger away from the point you first touched, the faster you will fly over the map. Left and right swipes will cause you to orbit around the point in the center of the map. You can combine these gestures to fly around the terrain much like in a flight simulator. In Joystick Mode, a two fingered swipe will cause you to fly sideways. All the other two fingered gestures also work in Joystick Mode but are spring loaded just like the one fingered  gestures.

The old Settings Panel has been removed and its options moved to the Map Style Panel. New options to allow you to enable background GPS tracking have been added.