The Scenic Map logo like you have never seen it Before!

Last August I visited Horseshoe Bend Arizona with my drone and was able to capture this video. The terrain from this location was used for the Scenic Map logo due to its S shape.
Posted by GrangerFX at 1:14 AM No comments:

Scenic Map and You Need A Map version 1.8.4 is be available for download or update via the App Store. This version is mostly a stability release with fixes for the occasional crashes experienced by some users, jumps in the GPS tracking line, and errors in the map data. The map itself has been updated to the latest version of the Openstreetmap database.

You can enable the grid in the Settings menu. Tap the cog icon and scroll to around the middle of the list and you will find the Grid option with None, Degrees and US CAP choices. Degrees show the latitude/longitude major lines with 15 minute sub steps. US CAP shows the US Civil Air Patrol grid for the continental USA and Alaska.

There is also one feature that has been removed from 1.8.4, iAd support because Apple has discontinued iAds. This means that the stand alone Scenic Map is no longer ad supported. You Need a Map will also gets access to the online maps option as a free feature in 1.8.4.

Unless a serious bug is encountered, 1.8.4 will be the last version that will run on older devices that are not compatible with the latest version of iOS. If you have an original iPad, you will still be able to download version 1.8.4 of the apps even when later versions are released.
Posted by GrangerFX at 9:39 AM No comments:

The 1.8.2 version of the paid Scenic Map apps and You Need A Map is now available for download on the iTunes app store. This version uses Apple's high resolution satellite map data to make the map look amazingly real. To see the satellite maps for yourself, first enable the Online Map option at the top of the Settings menu (tap the cog icon in the toolbar) and then tap preset 2 or 4 in the tab bar.

Here is a slightly extended version of the app preview for Scenic Map Grand Canyon to give you a preview of how the satellite maps look in motion. This video was recorded live from an iPad. There are a few frame drops due to the way the video is recorded but in actual use the animation is perfectly smooth 60 frames per second.

The free online only Scenic Map app has been updated to version 1.8. Since this app has no internal map data it is a small fast download. This allows it to be updated more frequently than the apps with offline maps. 1.8 will be coming to all the apps after it has been well tested and all the major bugs have been fixed.

The big new feature is the Satellite Color option. This replaces the Natural Color option when Online Map is enabled (it is always enabled in the Scenic Map app). The satellite image maps are cached just like the vector maps which allows you to use them when offline. They can be combined with the vector features or displayed on their own over the terrain mesh. 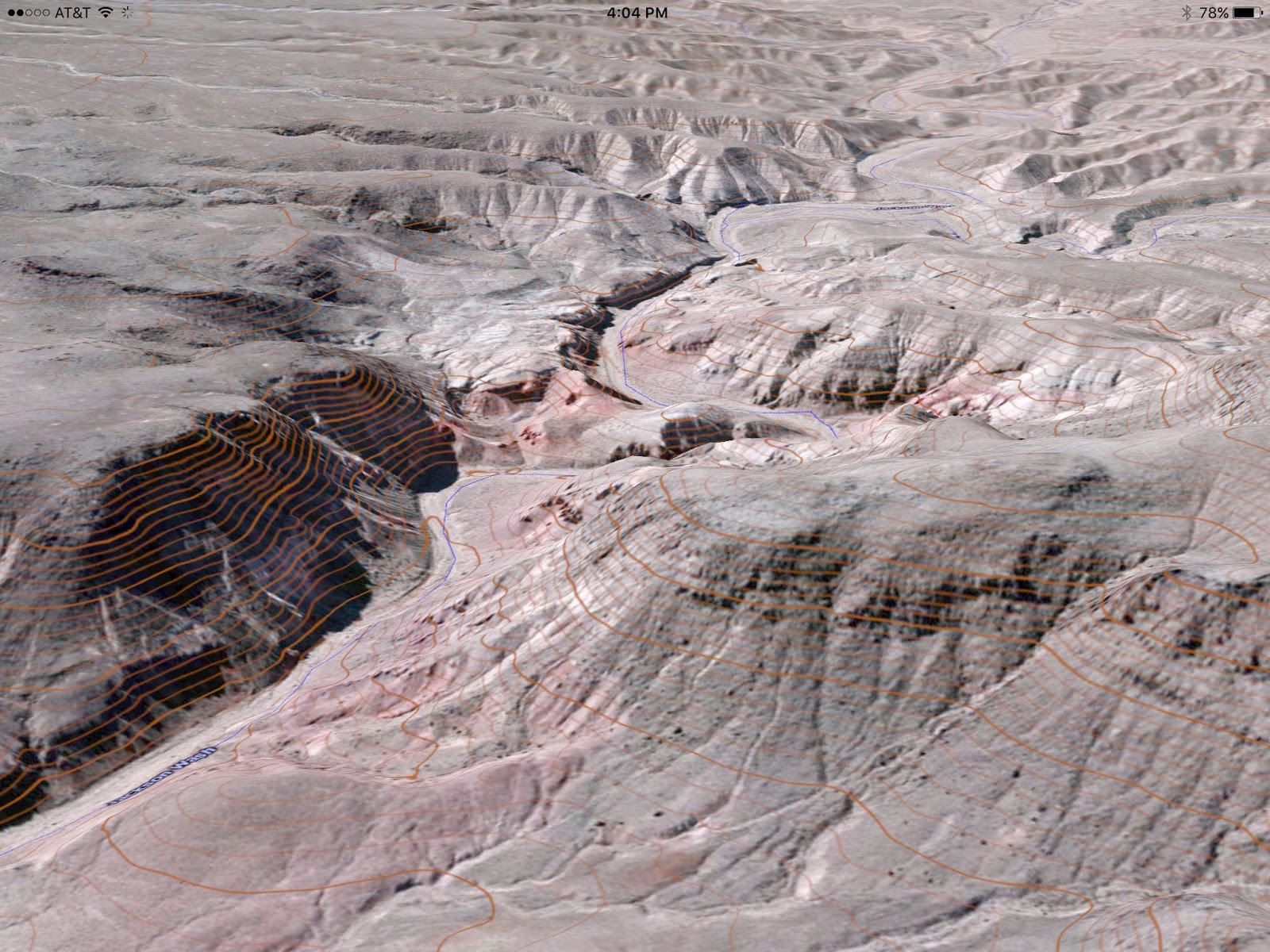 There are also new settings menu options to control the size of the cache. You can select 2GB, 4GB, 8GB or Max. Max will use up to 80% of the available storage on your device for the cache. If the cache gets too big, you can either select a smaller cache size or clear it to zero by selecting Clear Cache. 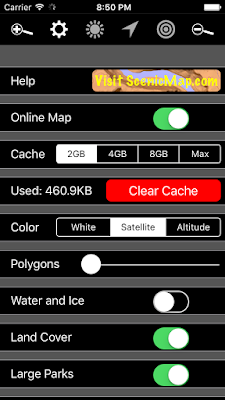 There are new Land Cover and Large Parks options to let you hide these polygon types. This lets you see the terrain or satellite images when driving through areas which would otherwise be solid green due to parks or forests but still see other polygons. 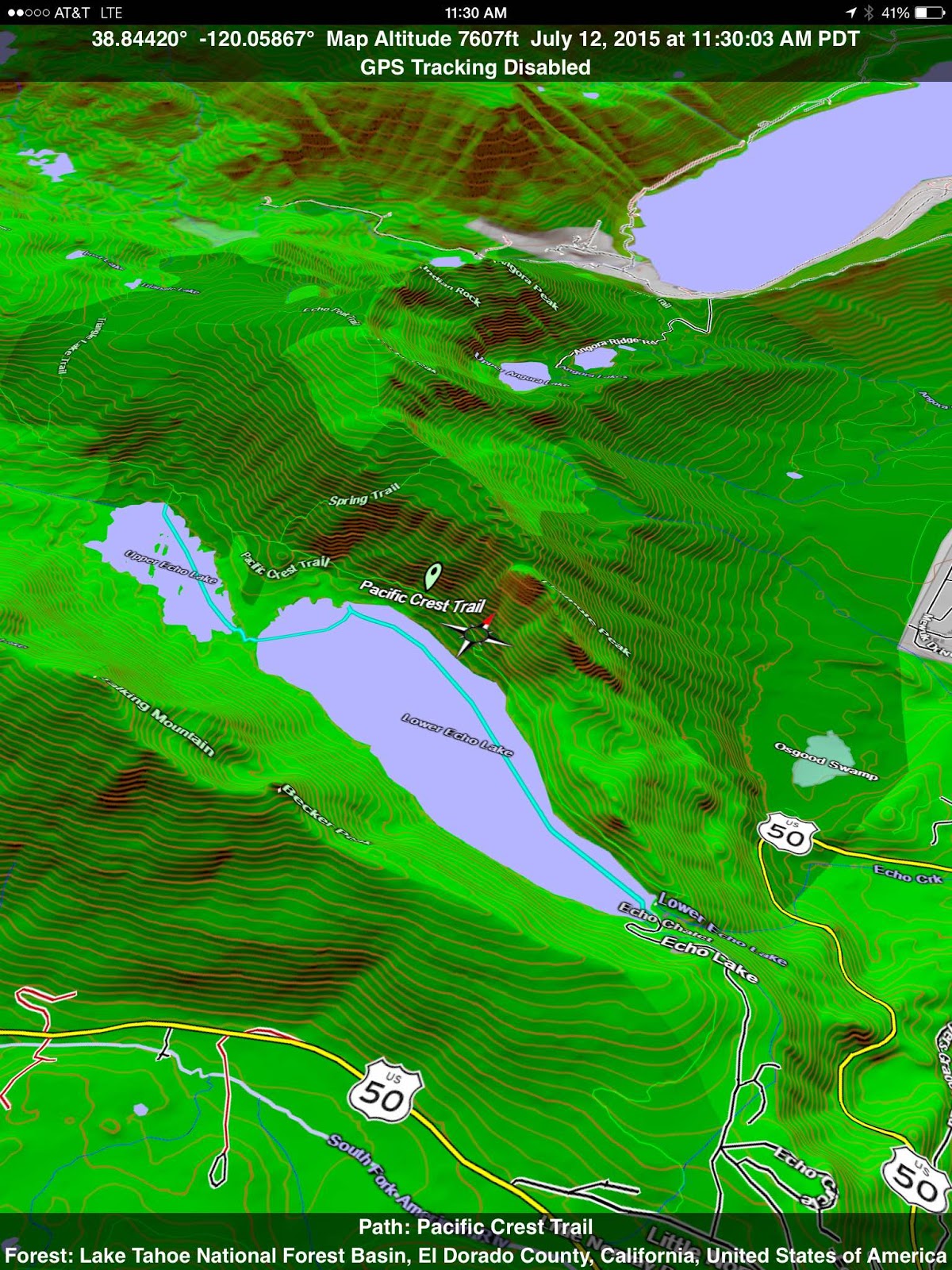 To calculate the distance between two points while recording a GPS track, tap the info button to activate the compass rose. Move it to the first point. Tap the Waypoints tab and then tap the + button in the toolbar to create a waypoint. Name it whatever you want. Tap on the gold star next to the new waypoint you just created. It will turn red indicating it is the selected waypoint. Tap on a map preset tab to return to the map. Move the cursor to the second point. The bearing line will now stretch between the selected waypoint and the point under the compass rose at the center of the map. The top info bar will display the range and distance to that point. You can optionally create another waypoint for the second point which will allow you to go back to that point again or mark it as the selected waypoint if you want to find the range and bearing to other points. Don't forget to deselect the waypoint if you want to use your current GPS location as the start of the bearing line again.
Posted by GrangerFX at 11:46 AM No comments:

Scenic Map 1.7.2 is now released on the iOS the App Store. As the screenshot above shows, you can now choose Stop Recording Track by tapping on the lock icon in the toolbar. This allows you to start tracking, lock the center of the screen to your current location and stop tracking all from the same button.

The other new feature is in-app documentation. This feature was requested by several users so that they can look up how features of the app work even when they are not online. The in-app documentation is still found at the top of the Settings menu (tap on the cog icon in the toolbar and select Help). This feature is only available in iOS 8 and later. It is a snapshot of the online documentation and will be updated automatically when your device is connected to the internet via WiFi. You can now search the documentation for keywords and then step through the results by tapping the Search button on the keyboard. You can still access other online features such as the tutorial videos.

Several of the items in the Settings menu have been renamed to make them easier to understand. Manu bugs have been fixed and the Online Map should load faster and more reliably.

Scenic Map Grand Canyon was updated to 1.7.3 to fix the Alternate Roads option which appears when you enable the Online Map (available with an in-app purchase). Otherwise it is identical to 1.7.2.

Posted by GrangerFX at 12:00 PM No comments:

Scenic Map version 1.7 is beginning a rolling release beginning with Scenic Map Grand Canyon. The big new version of this version is world wide coverage via cached online data. Grand Canyon and You Need A Map will get this feature via an in-app purchase while all other versions get it for free.

The online map data is hosted by Apple using their CloudKit feature introduced in iOS 8.0. The bandwidth and usage of CloudKit will need to be managed so as not to exceed Apple's quotas. This is the reason for the rolling release. Apple gives a larger quota as more people use the data service so the first two apps will be Grand Canyon and You Need A Map which have a very large number of users with relatively few who have the in-app purchase. The rest of the Scenic Map apps will be next as Apple approves them.

There is one more thing: A new app named simply "Scenic Map".  Scenic Map only uses the online maps so the download is small, quick and easy. Scenic Map is free and will be supported by iAds. There is an in-app purchase that upgrades all the features to match those of the other Scenic Map apps and also disables the iAds.

About iAds: There is now an option in the Settings which allows iAds to be turned on in any of the Scenic Map apps. It is off by default but if you want to support Scenic Map or are curious about iAds, feel free to turn it on and off as you wish. iAds are disabled and hidden when there is no connection to Apple's servers. This means that if you don't have a cellular data connection or have cellular data disabled there are no ads. I am encouraging Apple to make better use of the iAd bar to present useful information in addition to ads in future versions of iOS.

Other new features of Scenic Map 1.7:


Posted by GrangerFX at 2:58 PM No comments: